Romance is Not a Dirty Word

Romance is Not a Dirty Word

I write stories about love. I struggle to call them romances for a couple of reasons. One is that I don’t always hit the markers that make a story a romance – though I hit enough of them and especially the Happy Ever After (HEA) or Happy For Now (HFN) to be considered a romance writer most of the time. The other is the response you get from most people the second they hear the R word. Every romance reader and writer I know has experienced it to some extent. That moment when someone asks what you’re reading or writing and when they find out it’s romance, they roll their eyes (at best) or laugh out loud or begin to lecture you on why romance is a terrible thing to be reading or writing (at worst). Not every person, no. But, yeah a lot of people. If, as a writer, you want to see those people double down on their dismissal of what you’re writing, wait until you tell them it’s LGBTQ romance and/or that you’re an indie author – but those subjects are for another day .

There is this idea out there that romance writers and readers are some sort of sub-par species since if they were smart they’d be writing or reading something worthwhile. Worthwhile here means writing the next great *insert topic of choice* novel or reading Eyre or Shakespeare or something. How many of us have been told that if we must read romance, at least make it Romeo and Juliet (*cough* not a romance *cough*)? How many of us have hidden what we’re reading rather than answer questions or be made fun of? Even reading horror novels is a better choice than … romance. Side note – erotica seems to get a sort-of-pass: on one hand people are intrigued that you’re reading sex, on the other hand you need to be prepared for the inevitable “so did you like 50 Shades?” conversation. As for liking 50 Shades, gird your loins folks, because the response will be brutal. Personally, I have read the original 50 Shades trilogy. I didn’t like the books for a number of reasons (again a different post) but I did like that it brought women’s erotica into a mainstream space and allowed for a lot of other writers to be published and read. That was a good thing.

So back to my point about romance not being a dirty word. 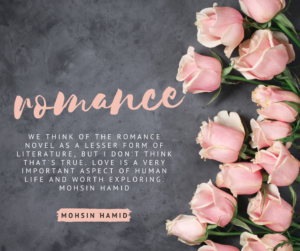 Enough with the stereotypes

There is this idea out there thatyour average romance writer is a Barbara Cartland type – as seen through the lens of most media – she wanders around with fluffly little dogs in herhand bags, designer cats draped over her jewelry jangling arms and calls everyone darling while sipping champers at three in the afternoon. The image of readers is even worse – not very bright, they like to curl up on their sofa with the television blaring their favorite soap opera and eating chocolate while they turn the pages of a battered paperback on the cover which is some very manly-man and womanly-woman.  Now before I go any further let me say this – even if those stereotypes do fit someone you know, so what? Seriously, so what? Barabara Cartland was an extraordinarily hard working woman who brought a lot of joy to a lot of people with her work and she earned her money just as honestly as any other person – so who cares how she dressed or if she had a fluffy dog? I have two very spoiled Tonkinese cats that get snotty if I am a minute late giving them dinner and I’m light years from Ms Cartland’s rank. As for that image of readers, don’t get me started. Who cares what they are reading or how or what they’re eating when they read? My only issue with the image is I can’t see the title of their book so I can go and get a copy.

Romance fiction accounts for a whopping one third of mass market fiction and according to Publishing Perspectives, traditionally published romances, which had seen a decline pre Covid-19, have had a significant increase since the beginning of the pandemic.  Over 80% of romance readers are women and while I don’t have the figures for the percentage of authors who are women, my guess is it’s probably similar or higher.

Romance is a space that is dominated by women and that alone invites ridicule. Men who feel threatened – and please spare me the emails and comments about not all men, I didn’t say all men, I know not all men – by women, women who feel threatened by other women, people who feel that if it’s not something they like then nobody should like it take great delight in putting down women who read romance. When it’s not people threatened by seeing women enjoying themselves, it’s people with some pseudo-intellectual idea that any book about love or sex is somehow inferior to any other kind of book, especially if it’s a contemporary novel. I’ve shut more than one critic up by pointing to my degree in Literature and telling them about my essay about “the echoes of DH Lawrence’s Lady Chatterly’s Lover that are visible in contemporary fan fiction.” Yes, I read gay romance – I write it too. Yes, I read fanfiction – and some of it is better than commercial fiction. And yes I have a degree in literature so please… take a damned seat until you can remember that making fun of people because they like to read something you don’t like is just fucking rude.

Let people have their HEA

Let’s talk about those last two. Love and the HEA.  To those people who declare those things aren’t worthy of a place in a novel, I say “ttthhhhbbbpppppttttttttt” (that’s me blowing you a raspberry by the way). To those who say that they are worthy of a place but that it shouldn’t look the way it does in books, I say  “tttttttttttthhhhhhhbbbbbbbbbbbbbbbtttttttttt” (that’s me blowing you an even bigger raspberry).  I agree with Mohsin Hamid above – love is worth exploring. In fact, of all the things in this life that deserve to be explored in books, in my opinion, love is the most important. For those experiencing it, for those missing it, for those needing it, for those who have lost it – every one of them, and every other person besides, deserves to see themselves somewhere on a page from time to time. Children deserve to grow up knowing that we can talk about love without embarrasment. Adults deserve to feel seen when it comes to love just as for anything else. As for what it looks like? Newsflash: not every book (or movie or any other artistic endeavor) has to be realistic.

Here’s the thing… the world can be a pretty shitty place – especially at the moment. Our climate is messed up, everywhere we turn groups are at each other’s throat over something, and lest anyone has forgotten there’s a pandemic hosting it’s own little dance marathon at our expense.  Day after day we get up and we do what we can with all of that. Sometimes we need a break from that stuff. I don’t know about you but there is only so much I can take before I need to take refuge in a book, a show, or a movie. We all take our solace where we can – we do yoga, we go to a movie, we have a glass a wine. Binge watch every gritty crime show being streamed – oh wait that might just be me… Sometimes, we read a book.

So how about if we just let people read what makes their heart happy and stop judging them for it? How about if we accepted that romance is not a dirty word but rather a multimillion dollar industry that provides a lot of people with a lot of joy?

What if we just let people have their HEA  – who knows what might be happening in their real life? Maybe the only place they’re going to get their HEA for a while is in a book.  What possible good can it do anyone to make fun of people for a few minutes of joy?

Now if you’ll excuse me I have a romance to finish writing – and then a new one to start reading.