Across the Sapphire Sea by Lee Colgin

Across the Sapphire Sea by Lee Colgin

Elias—plucked from indentured servitude at nineteen and turned into a vampire—is caught in a spiraling relationship with his possessive sire.

Valeri—a damaged soul who guards his secrets and fledgling alike—balances on a razor’s edge of good and evil.

In a race to save one of their own from a deadly sickness, Valeri and Elias lead an unlikely team on a dangerous voyage to pry secrets from an ancient group of vampires—a group that’s been known to kill trespassers.

The closer they come to discovering the truth, the wider the rift between Elias and Valeri grows—until Elias doubts the relationship can be saved.

Will they find a cure in time? Can Elias and Valeri make it to the other side together, or will ancient secrets shatter their bond forever?

Across the Sapphire Sea is an MM Paranormal Romance packed with action & adventure, a steamy love story, and danger at every turn. This is book two of a series and contains its own story and HEA with no cliffhanger, but author recommends reading Beneath the Opal Arc first for the most enjoyment. Novel contains scenes intended for mature readers, full warnings inside. 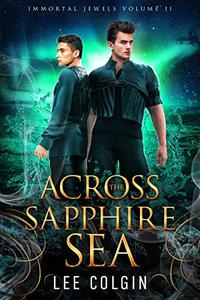